Yes, assignments!  Bet you didn’t know there would be homework when you wandered in!  🙂

Please do at least one of the following:

Extra credit if you do more than one!  Do not do all ten.  No perfectionism allowed.  🙂

Here’s a fun and easy way to make a little magic with your kiddos.

Have a zany photo shoot!

We’ve done many of these over the years and it always leads to smiles.

There are some free apps that let you get pretty creative, too.  🙂 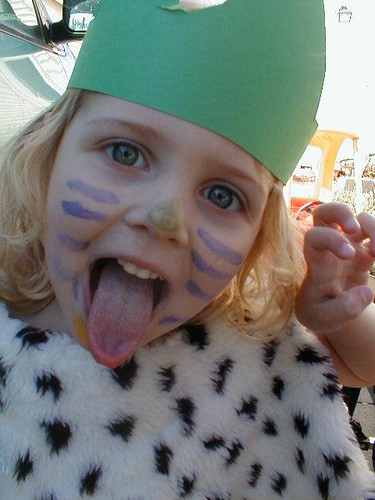 Victoria had told me about a German word that literally translates to “grief bacon” that describes the weight gained from emotional eating, such as after a loved one dies or during a period of depression.   It was featured in Mental Floss’s  15 Wonderful Words With No English Equivalent.

We’ve talked about that natural instinct to hole up in the house with food as comfort and how it’s definitely not healthy as a general practice but how it really does seem to help when things are really feeling miserable, like after the death of pets and loved ones.

So yesterday I suggested to Daryl that we toss out my typical health-crazed ways and proclaim today a Grief Bacon Day (vegetarian members of our family can call it Grief Popsicle Day).  🙂  He was on board, so we told the kids we were going to all go to the grocery store together and load up on comfort foods that we’d all pick out together and spend the whole day together as a family watching movies, eating junk food and just indulging ourselves in a way we usually don’t.

We spent the morning cleaning together to prepare (who wants to party in a messy house?) and then spread the table with the first round of indulgences.  Jack had picked out frozen fruit so he made us dixie cup fruit sorbets to balance out the chips, dip and other junky items that others picked.  Gluten free pizza, french fries, banana popsicles, 7-up and other goodies followed.

There’s lots more to come, including more foods and fun non-food items like puzzles and bubbles, marshmallow and toothpicks for building, more movies and crafts.

Some days you just have to loosen your own rules and look at the big picture.  A full-out, junky family day was just what the doctor ordered.  The mood in our house has done a 180 (and the house looks better too!).

And now, I’m off to watch some more explosions and add to my stomach ache.

Tagged as holidays, silliness, taking care of you

Got snow?  Here’s a delightful way to use it!

Wouldn’t it be fun to sneak outside tonight and do this to the family car?  Or even all the cars in the parking lot?!  🙂

In Praise of Silliness

“Draw a crazy picture,
Write a nutty poem,
Sing a mumble-gumble song,
Whistle through your comb.
Do a loony-goony dance
‘Cross the kitchen floor,
Put something silly in the world
That ain’t been there before.”
― Shel Silverstein

Here’s to a new year of silliness and fun.  🙂

The kids and I got a fun pirate book recently and inside was a chart to help you find your pirate name.  Unfortunately, their chart left us a bit flat (9 out of 10 names were for boy pirates, for instance!) so we came up with our own pirate name generator.

To find your pirate name:

Pick 3 numbers, each one ranging  from 1-10 (you can use the same number more than once).

If you’d like a boy pirate name, pick a number between 1-5 for the last number.

If you’d like a girl pirate name, choose a number between 6 and 10 for the last  number.

Then find the word that corresponds from each list:

Feel free to make up your own lists too!

Tagged as all ages, fun, silliness

A Little Picture and Poem by Victoria

Looking for a way to have some goofy fun with your kids?  Here’s a totally silly activity we did with friends on vacation one year.

We bought a bunch of grapes and handed out Sharpie markers, then altered the grapes to make little people, bugs, messages, you name it.  After that, we wandered around town and left the grapes in surprising places.

We left a little bulls-eye grape in an outdoor ashtray, a little “bless you” grape on a park bench, a row of “The Grapeful Dead” grapes and so on.

It was utterly ridiculous and grape fun!

When my girls were little, I sometimes came up with creative ways to occupy them when I was sick.  Between problem pregnancies and long-term illnesses, I spent a lot of time on the couch with little girls who were not the type to sit still and watch Sesame Street.

One of the ways I used to occupy them was to let them draw on the bottoms of my feet.  I’d give Victoria washable markers and she’d doodle halfway up my leg while I got to rest and not fall down or throw up for a little while.

(I still remember how idiotic I felt at the prenatal appointment when I stripped down and then realized I was decorated up to my knees in toddler art and had forgotten to wash it off!)

I still use the busywork trick.

For a good twenty minutes, I lined up fire trucks and convertibles with one little boy while another enthusiastically decorated me.

On my right foot was a series of… well, I have no idea, but upside down they look a bit like a weird smiley face.  And on the left… I was orange.  Jack decided he wanted to make me an alien.

It worked.  I watched my show, the boys played and were happy (before moving on to the next busywork — even doing graffiti on Mom only works so long), and I’m pretty sure most of it was non-toxic.

And then today… I kept meaning to take a bath or jump in the shower but one thing after another happened.  And so I took a walk around the neighborhood with two little boys and decorated feet.  I drove to the lawnmower repair shop and rode along to the car repair shop to see about air conditioning.  I gardened and chased the kids outside.  I said “hi” to the passing teenagers.

All with these feet.

(Blue toenails courtesy of Annalee, who offered me a free spa treatment and pedicure the same night.)

My left foot kept scaring me throughout the day.  I’d forget about it all and then catch sight of that and think I’d missed some sort of terrible accident.

Even after I finally got that bath, my left foot is still pale orange.  And the brown heart appears to be permanent.  I’m surprisingly unconcerned, though.  It kind of makes me smile.

I can’t imagine what our townspeople must think of me.  🙂

I just stumbled onto these pictures that Victoria took last summer when she was staying with Magical Mama Tiffany and her family.  How’s this for cheap, easy and delightful fun?  🙂

She and her friend Judith, who was visiting from Texas, made all of these little folks…