Thank you for all your kind words about Victoria.  It’s meant a lot to our family.

I thought I’d post a little update on how she’s doing but I’m not sure I ever posted much information to begin with so here’s a super short recap:

Victoria had surgery on May 2nd to remove a lump that had been below her ear for over a year.  A doctor and specialist had told us that it was “nothing” but we finally pushed for it to be removed and another doctor agreed it was best since it was growing larger.  The surgery was a parotidectomy, since the lump was sitting on top of her parotid (salivary) gland.

She had a difficult recovery, with a lot of pain and pretty severe swelling on the side of her face.  At her two week recheck, the doctor informed us that a biopsy had revealed a rare type of cancer of the parotid gland instead of the benign cyst he was expecting.  He said he was optimistic that it had all been removed, though.

Last week, we went to an oncologist who specializes in cancers of the ear, nose and throat who told us that the surgeon had removed the cyst in a way that was dangerous since he hadn’t known it was cancerous (basically, you want to take extra all around and “ink” it to help determine if there is more anywhere and be sure you got it all).  She also palpitated the site to see how Victoria was healing.

Within about an hour of the appointment, Victoria was in a lot of pain and by that evening she was in excruciating pain, sobbing and shaking with a high fever.  We rushed her to the emergency room, where they gave her large doses of pain medicines and IV fluids to no relief.  She spent the night in the hospital and in the morning we rushed her back to Sioux Falls to the oncologist’s office.  Victoria’s oncologist was now in Aruba, so another specialist saw her and immediately admitted her to the pediatric ward of the local hospital.  She had a severe infection where she’d had the surgery (it’s likely the infected area burst and spread during the palpitations the day before).  They did emergency surgery that night to deal with the infection, and she was released from the hospital on Sunday.

The good news is that she’s healing very well from this surgery and she’s in much less pain.  She had her stitches removed yesterday and the surgeon told us he looked at the pathology report from the initial surgery and the cancer does seem to have been removed well (there were clear margins all around, meaning that the extra that they want was there).  She will have a special type of CT scan in three months to look for more cancer.

Victoria is still on antibiotics and pain medication, but she’s getting back to her usual self.  She’s pretty weak and things like chewing still cause her pain, but her spirits are much better.

The cancer is a very rare type and it tends to be very slow growing, which is good news.  Victoria’s surgeon has another young patient who had the same type of parotid cancer and has been doing well for two years.  We’re optimistic right now about the cancer, the surgery, the infection and her medical team.

Meanwhile, every other member of our family has been sick this month too.  We’ve had coughs, colds, flus, an eye infection, a respiratory infection, fevers, stomach pains, allergies, sore throats, headaches, lost voices and general exhaustion.  We all finally seem to be getting better now that the worst of the crises are over.  We have high hopes for June!

I’ll be back soon.  Thanks again for all your sweet comments, thoughts, prayers, letters and words of support.  🙂

Some of you may know that our daughter Victoria was back in the hospital this week.  She had a couple of very scary days with a lot of pain and another surgery, but she’s back home again now.  We are in limbo with her cancer diagnosis (the latest news is now cautiously optimistic), but her most urgent medical needs have all been met and we’re getting her the best care we can.

This has been a rough month.

Right now I’m focusing all of my energies on taking care of my kiddos and getting our lives back in healthy, happy places all around.

I’ll be checking in off and on, but I’m taking a smallish break from A Magical Childhood while focusing on family.

I’ll be back soon.

Kiss your babies, count your blessings, and don’t forget to add a little magic to the day.

Ten years ago, my little girl was a four year-old happily splashing in puddles.  Victoria was my joyful model for the picture on the What should a 4 year-old know? article that brought a lot of people here over the years.

Two weeks ago, Victoria was having surgery to remove a cyst on her jawline that had been bothering her for over a year.  Numerous doctors dismissed it as nothing and told her to just leave it alone, but it was growing and we finally found a doctor who took it seriously.  My baby had an IV and a breathing tube, and awoke to a drainage tube coming out of her neck for two days.

At her two week follow-up with the surgeon this week, we were informed that it was cancer.

In today’s world, the easiest way to update a whole lot of concerned loved ones at once is sometimes Facebook, and this was my status that afternoon.

It was cancer (papillary cystic acinic cell carcinoma) but the prognosis is good. He believes he got it all and it is one of the “best” parotid cancers to get. She has a 12% lifetime chance of getting it again. There’s no need for chemo or radiation, and this was probably the cause of her terrible headaches the past few months. Her case was forwarded to a specialist in children’s parotid cancers in Iowa and we have his recommendations too. We’re getting a second opinion just to be cautious, too. The swelling and leaking should stop in the next few weeks and there’s no infection. She’s feeling okay about the whole thing (though she’s sick on top of things, with this bug that Anna, Fiona and I have) and Dad took her for lunch and ice cream.

We are optimistic about her prognosis and we will be very proactive in finding information, keeping her immune system healthy and minimizing its chances of ever returning.  That doesn’t mean I haven’t had my share of scary thoughts, google searches and late-night mama worries, but knowledge is power and we’re pretty good at accumulating a lot of knowledge around here.

What has really struck me during this ordeal is how strong, funny, brave, rational and all-around amazing this kid of mine has been throughout it all.  From researching parotid glands on her own to keeping up a hysterical run of gallows humor at times to telling me “Mom, just don’t freak out,” she’s been wise beyond her years and incredibly positive.

Every person in our family is now sick (with all different things!) and we are still recovering from 3 birthdays in one week and a week of hosting a super fabulous extra teenager and all sorts of adventures, both good and bad.  I hope to be back soon, but I thought I’d fill you in on all of this.

My goals for all of us the next few weeks involve rest, love, laughter, good nutrition and good times together. Oh, and somehow catching up on laundry…

Oh yes, and getting the materials to make this next month, because that just looks awesome.  🙂

Kiss your babies, count your blessings and let the laundry wait if you have to.

Here’s a fun project to do for your next art adventure.  Alter some artwork!  Twisted Sifter posted the altered thrift store masterpieces by artists Chris McMahon and Thryza Segal, and the results are so fun!

You can generally pick up oil and acrylic paintings at thrift stores for next to nothing, and then assign the kids the task of adding in a magical creature or two. 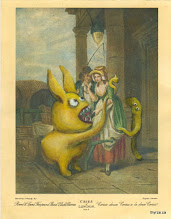 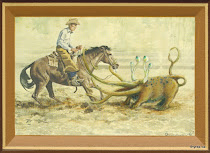 My late father was an artist and he often bought thrift store paintings and just painted over them completely since it was much cheaper than buying new canvases.  I’ve planned for a long time to take some paintings and have the kids just add on to them, but I like this idea even better.  We recently bought a bucketload of framed art and pictures for Victoria’s photography, and now I think we need to go back and get another stash for this project. 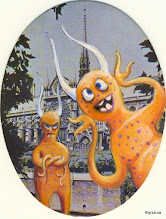 It’s a busy week for us.  Jack turned 9 yesterday.  Victoria turned 14 today.  Victoria has surgery tomorrow (she has a mass on her jaw that doctors need to investigate and remove).  Alex turns 5 the next day (yes, 3 of our 5 kids have birthdays the same week!).  The next day, we leave for Minneapolis and the next day we are taking part in a historic presentation (Daryl will be teaching folks how to use the telegraph!).  The next day, we’re bringing a wonderful friend of Victoria’s back home to stay with us for a week.

I’m trying not to think too much about all the things I have to do!

But in the meantime, I’m making up a to-do list of the fun stuff to be sure to accomplish in the next week or two besides the birthday fun and family adventures.

I want to try to…

We’ll see how much we get to.  But I’ll be happy if we just find some time to have a little extra fun.

What’s on your to-do list for fun next week?

Filed under To do