What Should a 4 Year Old Know? 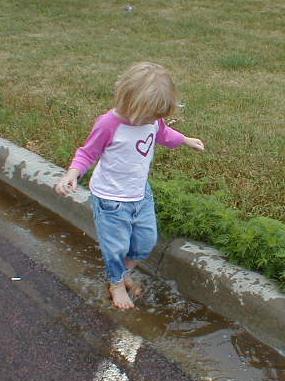 It’s back to school time and children all over are starting preschool.  Many parents are frantically searching the internet to find out if their little ones are “on track” and know everything they should.

I wrote this article about what a four-year-old should know many years ago but it continues to be the most popular page on the Magical Childhood site.  I don’t think a week has passed in the past eight or so years when I have not received a letter from a parent, grandparent or teacher about it.  Parents and principals especially have said they wish more parents realized these things.

So in honor of the new school year, I’m posting it here…

What should a 4 year old know?

I was on a parenting bulletin board recently and read a post by a mother who was worried that her 4 1/2 year old did not know enough. “What should a 4 year old know?” she asked.

Most of the answers left me not only saddened but pretty soundly annoyed. One mom posted a laundry list of all of the things her son knew. Counting to 100, planets, how to write his first and last name, and on and on. Others chimed in with how much more their children already knew, some who were only three. A few posted URL’s to lists of what each age should know. The fewest yet said that each child develops at his own pace and not to worry.

It bothered me greatly to see these mothers responding to a worried mom by adding to her concern, with lists of all the things their children could do that hers couldn’t. We are such a competitive culture that even our preschoolers have become trophies and bragging rights. Childhood shouldn’t be a race.

So here, I offer my list of what a 4 year old should know.

But more important, here’s what parents need to know.

And now back to those 4 year old skills lists…..

I know it’s human nature to want to know how our children compare to others and to want to make sure we’re doing all we can for them. Here is a list of what children are typically taught or should know by the end of each year of school, starting with preschool.

Since we homeschool, I occasionally print out the lists and check to see if there’s anything glaringly absent in what my kids know. So far there hasn’t been, but I get ideas sometimes for subjects to think up games about or books to check out from the library. Whether you homeschool or not, the lists can be useful to see what kids typically learn each year and can be reassuring that they really are doing fine.

If there are areas where it seems your child is lacking, realize that it’s not an indication of failure for either you or your child. You just haven’t happened to cover that. Kids will learn whatever they’re exposed to, and the idea that they all need to know these 15 things at this precise age is rather silly. Still, if you want him to have those subjects covered then just work it into life and play with the subject and he’ll naturally pick it up. Count to 60 when you’re mixing a cake and he’ll pick up his numbers. Get fun books from the library about space or the alphabet. Experiment with everything from backyard snow to celery stalks in food coloring. It’ll all happen naturally, with much more fun and much less pressure.

My favorite advice about preschoolers is on this site though.

What does a 4 year old need?

Much less than we realize, and much more.

Happy Monday!  How can it be the start of another week already?  The end of summer is flying by!  Here’s ten ways to make the most of it before it’s gone!

1.  Hand out permanent markers and plain white socks, and let the kids make some fun feet!  Check out these cuties that Victoria made for Alex!

2.  Put out a box of all sorts of wonderful art materials you don’t always let the kids use and let them do anything they want with it.  Consider fun items like scrapbooking papers, glitter, glue dots, paint, cardstock shapes and feathers.  Then just let the mess (and magic) unfold.

3. Gather up an empty spray bottle and some essential oils or other favorite scents and help the kids make custom air fresheners.

5.  Try to conduct your entire family dinner conversation in song.

6.  Find a nearby sculpture walk or sculpture garden and tour it together.

7.  Invest in a small box or bag of fabulous chocolates or truffles and indulge in them with your child as a special treat.

8. Go find some milkweed pods, cattails or other magical bits of nature to throw up into the wind.

9.  Head to an ethnic store and see what sort of unusual foods and special trinkets you can find.  We headed to a wonderful Asian market last week and found darling little sauce dishes for 25 cents each, some wonderful sauces and some seaweed for a certain girl who loves the stuff.  We passed on this particular item though…

And with that, chickadees, I’m off to catch up on some much-missed time in dream-land.

Have a magical week!

We’re back from our camping trip, and once again so happy to have such wonderful friends to do this with every year.

We had such a fun time we extended the fun and one of the friends came back to our house for a sleepover the next night.  We ate junk food (how ironic that we ate fancy meals cooked over the campfire in the wilderness, and then pizza and chips at home!), watched a video and put the sleeping bags back to good use on the living room floor.

It was a wonderful time, as always.  It didn’t even pour down rain!

I’m terribly sorry to be gone so long!  It’s our local school’s back to school week, so it is our not-back-to-school week here at home.  We’ve been adventuring of one sort or another all week (hence the camel!  we met him at the zoo!) and we are leaving now to meet some friends for a camping adventure.

Here are some fabulous things elsewhere to make up for my slacker ways this week!

And now, I’m off to frantically pack a van full of camping equipment and forget half of what we  need.  It’s my way.  😉

Kiss your kiddos, count your blessings and sneak yourself some chocolate.  See you soon!

Happy Monday!  Life can be pretty hectic this time of year.  Here’s a few ways to slow down and make some memories together along the way.  🙂

1.  Spend a dollar on a pack of rocket balloons and go fly them in a wide open space.

2.  Tape yourselves dancing and being silly to favorite songs and then watch them on the TV or computer.

4.  Have a sack race.  Pillow cases work well.  Everybody hop to the finish line.  Older kids and grown ups can hop backwards.

6.  Go on a quest for a really fabulous climbing tree (big old trees with at least one big horizontal branch are perfect) and then climb it and play on it together.  If you like, have a snack in it too!

7.  Go on a joking spree!  Write out corny jokes on small pieces of paper and leave them for folks to find– on counters, in bathroom stalls, you name it.

8.  Do some rolling pin painting.

9.  Make mud pies.  Put out some special tools if you can.  We pick up little metal tart pans, ice cream scoops and other items for pennies at thrift stores and they really add to the fun.

10. Make a vision board for the new school year together.  Gather up a bunch of old magazines, sheets of posterboard and scissors and glue.  Have your children cut out words and pictures that represent things they want for the new year, then glue them onto the board.  Encourage them to be optimistic and to dream big!

Have a magical week!  Don’t forget to take care of you!

Here’s a fun idea I read online a while back and want to try before the end of summer.  Play water limbo!

Have kids play limbo in the backyard, under a stream of water!  It sounds like a marvelous way to get cool on a hot summer day.

They also suggested playing Water Hurdle, where you leap over the stream of water and raise it higher and higher.  Either way, it sounds like a hoot.  🙂

Life can run hot and cold when you’re a seven-year-old boy.  Here’s a sampling of the good and bad through Jack’s eyes lately.

Waiting out warnings in the tornado shelter

Being eaten by sharks

Here’s hoping your week is more good than bad!

Filed under This and that

Yesterday, we were driving down the street when I was struck by a feeling of gratefulness and happiness about my crazy family.  I tilted my head towards the back of the van and shouted, “I love you guys!”.

There were some assorted “Love you too, Mom” replies from the back but 3 year-old Alex was silent.  I turned around and saw him scanning the streets outside, looking confused.

He finally piped up and said, “Where are the guys, Mommy?”.

Happy Monday!  I hope the weekend weather was as fabulous for your family as it was for ours.  Here’s a few ways to have some fun with your kiddos this week….

1.  Challenge the kids to make each other laugh as much as possible.  Try for all out belly laughs, snorts and the type of giggles where you can’t catch your breath.  If you can, catch it on tape to make you all laugh all over again later.

2.  Throw a dinner party just for your family.  Put out the good china and some delicious appetizers, set the table grandly and dress the part.  Put on some music, light some candles and take your time enjoying your own company together.

3.  Turn some old stuffed animals into puppets and put on a puppet show.

4.  Take a ride on a bus, train, subway or other mode of transportation that is out of the ordinary for your child.  It’s amazing how magical even a city bus can seem to a little person who hasn’t ridden one before!

5.  Go hang out at a local science center or museum.

6.  Make lunch in miniature — make tiny sandwiches, itsy bitsy salads, miniscule cookies and so on.  Serve on tea party dishes and have seconds (and thirds and fourths…).

7.  Write something random and silly halfway down the toilet paper roll and then roll it back up again.

8.  Take advantage of what’s left of summer and head to the beach.

9.  Write a letter to your child and slip it under her pillow.

10. Host a new food picnic.  Ask each guest to bring one dish that’s unusual and tasty.  See how many delicious new dishes you can discover, and just plain have fun.

And with that, my dears, I’m off to pack for an overnight visit to Grandma and Grandpa’s and a park date with some fabulous friends.

Have a magical week!  Don’t forget to take care of you!

We had to kill some time outside with a crowd of antsy kids recently and my ingenious husband whipped up some instant fun to keep them all happy. 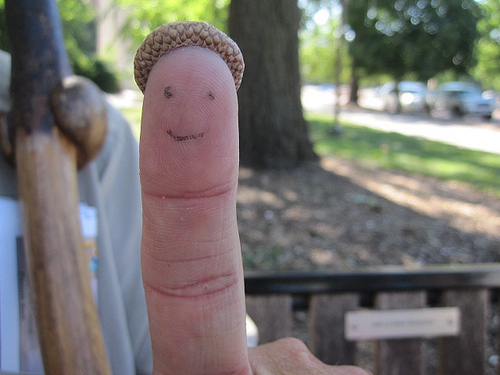 He grabbed some acorn caps, stuck them on his fingers and on the children’s, and drew some corresponding faces.  Presto!  Instant finger puppets!